I launched Spincloud on New Year’s day. I didn’t expect a flood of traffic to hit the site since -let’s face it- there was nothing groundbreaking. Spincloud was born from my idea of having access to the world weather in one step or less and I’m pleased with the results so far. Spincloud gains adoption every day and this is only due to the people that saw something new and exciting in it. There are blog posts, traffic graphs and other goodies to talk about so let’s begin.

I announced spincloud’s launch on my personal blog then Keir from googlemapsmania broke the news to the community. And so the first spike of traffic was logged on Jan 2nd.

Then followed a month of relative silence during which I took a much needed break from the project. I couldn’t help but refactoring and cleaning-up the code a bit. I had two minor releases deployed in prod in the mean time and everything went smooth.

I had a new feature I wanted to have online before the initial release, the meteoalarm mashup that displays weather warnings across Europe but chose not to delay it (a Good Decision in hindsight) . I started working on it by mid January , did a lot of digging for administrative borders data then getting the meteoalarm warning data right (those guys don’t have any integration point). I was done two weeks later.

In the mean time I was trying to raise the awareness about spincloud. I submitted the site so some mapping/mashup themed websites, improved the indexing (still working on it). Then Wednesday last week the European bloggers finally found it. UK’s Mapperz ran a nice little story that seems to have set the things in motion. A number of other bloggers picked-up the story and a surprisingly good feedback came from Italy: Matteo and italiasw.com did a great job while  gisdk.blogspot.com of Denmark  noticed the RSS facilities. Then the referral machine kicked in,  killerstartups.com, programmableweb.com amongst the sites linking. And thus the second spike registered on the traffic meter: 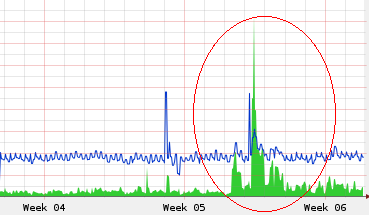 This one was three times bigger than the first spike and it was yet again all thanks to the blogger community that saw something useful in spincloud.

Things are looking up.  There are a few sites in Asia following spincloud: drchoi.or.kr and wangtam.com and I see that 16 people linked to spincloud on delicious. Yey!

The traffic tripled on an average from last month and I’m delighted. The server hums happily for now and I have all reasons to keep it that way.