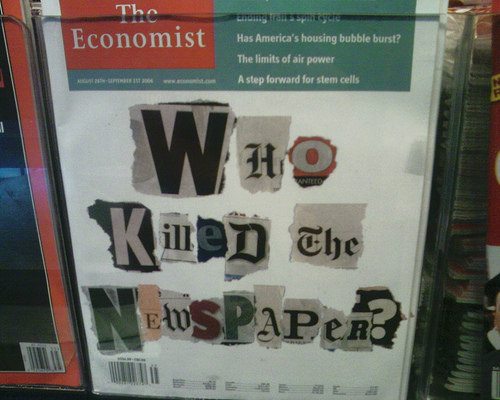 There’s an interesting story rippling the news stream these days: The New York Times is questioning the ways Techcrunch reports on news. The crux of the issue is product journalism v. process journalism, the act of producing news only after all facts have been verified versus just writing the story based on what the author best knows about an event at that moment then let the story evolve and provide rigorous updates and corrections once it does.
As I was reading, I got an epiphany. The “old media” is following the old methods, much like the waterfall process where the story (the requirements) has to be fully known before proceeding with actually breaking the story (the implementation). The new media follows a radical approach: it starts with a lead (or rumor) that is initially published in a somewhat crude form, then the story evolves based on field feedback and facts drawn from the actual reality, until it becomes accurate. Even the language of the aforementioned references use words like “iterative process”, “transparent” and “standards” the same way I’d use them when talking about developing software.

This method of early release followed by incremental improvements resembles so much the agile methods of software development, I’m calling it Agile Journalism.

A revolution is happening in the media. Old methods are swiftly pushed aside; the emergence of the Internet as the news dissemination medium is fundamentally changing the ways the reality is reported upon. Who wants to read a story that is already obsolete or wrong altogether and impossible to be corrected/evolved until a new paper edition is off the press? The new media not only breaks news faster (release early) but gets the stories right eventually, simply because the new rules (standards) are clearly stating that until confirmed, the product -otherwise useful- is still a beta representation of the reality and the consumers already know how to consume such product.

From blogs to real time news streams, the new media’s aspiration is to bring the most accurate information yet to the consumers. It can and will do it by revolutionizing the way the stories are iteratively discovered based on constant feedback, the same way agile methods are revolutionizing the software industry.