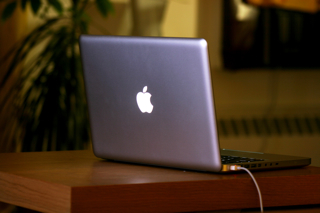 I just bought my first MacBook yesterday. My current laptop (a beaten down Toshiba Satellite) was long overdue and I realized that I didn’t want yet another boring Win notebook, it just doesn’t do it for me anymore. I’m in front of a PC every day at
work and I surely don’t want to see the same things while at home. And so I was determined to buy a Mac. My first Mac. I didn’t know that much about Apple and still don’t (imagine that)…
I waited until the new MacBooks were announced (no rush, I don’t know much about these machines anyway) and I started to do my research. A $1500 laptop seems a reasonable price for a good laptop and I had two requirements: not that big and not that heavy. MBPs seemed too expensive so my choices were the 2.0 or 2.4 MacBook. I eventually choose the 2.4 version mostly because of the backlit keyboard.

I ordered it online at the Apple Store and received the box it two days later. I didn’t set my expectations too high although I hoped that it’ll suck less than my boring Toshiba.

The first impression was quite pleasant, the machine looks astonishing. It’s finished to perfection. And pretty light too. OK, first impresion was good. I understood why I keep seeing them in the movies: they’re damn sexy. Still, skin-deep doesn’t do it for me. Gotta be more under the hood to really like it.

I’m a minimalist. I can say that the installation was the shortest I’ve ever seen. I especially enjoyed the snapshot that is taken when you create the username, nice touch.

Then I saw the interface. I’ve been around UNIX/Linux since the early ’90s, I developed an attachment to it since my student years. I still remember the HPUX machine we had in the lab, what a gorgeous GUI it had (ah Motif, still miss you). My first contact with Linux was through Slackware, a remarcable distro. But the Leopard OS is a beauty. It resembles the Linux’s own Gnome (now I know where the inspiration came from) but it has a window manager done right. And again, I realized one more thing: the legions of Apple followers started to look rational. And so do the lineups in the Apple Stores or around wireless carrier’s outlets that sell iPhones. Revelation time.

As I explored the OS more and more, I noticed that didn’t miss much from my old PC world. Moreover, I feel more productive than before. The multi-touch trackpad is just good. I’m a long-tie fan of browser mouse gestures (since Opera) and moving the concept one step ahead is quite refreshing. The Safari browser is much more responsive than Firefox and I’ve switched to it. There are  less and less differences between browsers these days anyway and I can live without the firefox plugins for a while until I feel that I really need them (especially Ubiquity and delicious).

As a linux guy, I feel at home with the goods that the UNIX OS has to offer. Moving to UNIX was a bright move by Apple: they can access the technological advancements and ideas contributed by the powerful Linux/UNIX communities. A brilliant gambit.

As a Java&web developer I was a bit concerned by the suitability of this notebook as a development machine but I can report that Eclipse, MySQL, Subversion and all the others work just fine. I’m having a problem with the Maven and SpringIDE plugins but I’m blaming the Eclipse (it’s a 3.4 version) at this point. The 13″ screen is just fine for coding, no complaints.

I actually feel more inspired working on this machine. Now I only need the Mirra and my dream home office will be complete.

Enough already. I switched. There’s no looking back.