Update Mar.04 Thanks to @ewolff some of the points described below are now official feature requests. One (SPR-6928) is actually scheduled in Spring 3.1 (cool!). I’ve updated the post and added all open tickets. Please vote!

This post is somewhat a response to InfoQ’s Comparison of Spring MVC and JAX-RS.
Recently I have completed a migration from a JAX-RS implementation of a web service to Spring 3.0 MVC annotation-based @Controllers. The aforementioned post on InfoQ was published a few days after my migration so I’m dumping below the list of problems I had, along with solutions.

Same relative paths in multiple @Controllers not supported
Consider two Controllers where I use a versioned URL and a web.xml file that uses two URL mappings:

END_OF_DOCUMENT_TOKEN_TO_BE_REPLACED

I want to write testable code and occasionally I bump into frameworks that make it challenging to unit test. Ideally I want to inject a service stub into my code then control the stub’s behavior based on my testing needs.
Commons Http Client from Jakarta facilitates integration with HTTP services but how to easily unit test code that depends on the HttpClient library? Turns out it’s not that hard.
I’ll cover both 1.3 and the newer 1.4 versions of the library since the older v1.3 is still widely used.
Here’s some typical service (HttpClient v1.3) we want to test. It returns the remote HTML page title:

with the HttpClient is injected at runtime (via some IoC container or explicitly).
To be able to unit-test this code we have to come-up with a stubbed version of the HttpClient and emulate the GET method.

END_OF_DOCUMENT_TOKEN_TO_BE_REPLACED

Level 2 cache is one of the most powerful features of the JPA spec. It’s a transparent layer that manages out-of-session data access and cranks-up the performance of the data access tier. To my knowledge it has been first seen in Hibernate and was later adopted by the then-emerging JPA spec (driven mostly by the Hibernate guys back in the day).
As annotations gained strength and adoption, L2 caching that was initially configured through XML or properties files, was brought closer to the source code, alas in different forms and shapes. This becomes apparent if you ever have to deploy your webapp across a multitude of containers as you have to painfully recode the cache configuration (or worse, hand-coded cache access). Why not standardizing the cache control in JPA? This seems to be simple enough to achieve and yet it isn’t there. Now that JPA 2.0 is standardizing on Level 2 cache access (See JSR 317 section 6.10) it is the natural thing to do.
Every JPA provider has its own way of specifying cache access (both Entity and query cache).
To grasp the extent of the various ways cache is configured, here are some examples:

END_OF_DOCUMENT_TOKEN_TO_BE_REPLACED

TL;DR: Go for a VPS. I now use Digitalocean, they’re awesome.

Selecting a web hosting provider is a tough job for any web developer that wants to put a Java/JEE web application online. The choice is much simpler when it comes to publishing a PHP web site and there are a load of cheap (and sometimes quite reliable) PHP hosting providers to choose from with LAMP being the de facto standard in the web hosting world. But when it comes to Java hosting providers the picture becomes blurrier. The common thing that all these environments need is a Java container. The most popular choice is Tomcat but there are providers that use Resin, Weblogic or Websphere (the latter two are full fledged JEE containers).
With the raise of lightweight J2EE servers started by the Spring folks, a little revolution began in the Java world: running enterprise-grade JEE webapps without the need for an EJB container; a servlet container is enough. Tomcat should fill the bill for just about any Java web application that doesn’t use EJBs. The advantage that comes from running a servlet container is the smaller footprint compared with an EJB container. This is critical when it comes to selecting hosting environments since you’re paying for resources (especially RAM) that have to be sized to accommodate the memory requirements of the web application.

Self hosting: Home-based dedicated server (near $0)

You can use your home internet connection and a PC where the web container runs and deploys your web application. There is an obvious advantage since the server is physically located close to the development team: complete control and physical access to the machine. The other big plus is the price: you’re already paying for the internet connection and chances are you already have a PC that can be transformed into a server. And chances are that you already have a development environment that can be the basis of the production deployment. Here are the shortcomings:- Bandwidth limitations: the webserver where the webapp lives will upload content to the web browsers that access the application. The upload bandwidth is smaller than the download bandwidth and will result in longer load times for web clients.
– Some internet providers cap the internet traffic so you may run beyond the limit.
– You may violate contractual obligations you agreed with your Internet provider by running your own web server.
– The internet connection is not reliable: provider’s downtime directly translates in downtime for your webapp.
END_OF_DOCUMENT_TOKEN_TO_BE_REPLACED 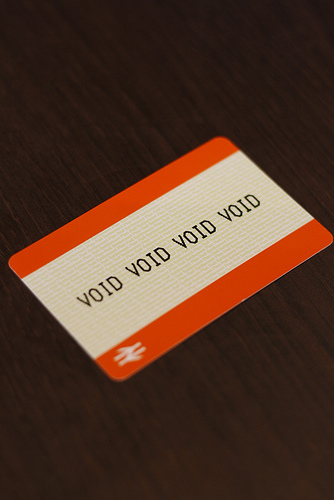 I’ve considered myself a Java guy (that’s before I recently started with Ruby). I’ve stumbled upon Java in 1998 and fell in love with it at first sight. I remember quite crisply my first encounter of the third kind with Hello World. But I confess, I only learned about java.lang.Void yesterday. I was digging through the SwingWorker concepts and as I went through the tutorial I was intrigued by a mention about the Void type in the Simple Background Tasks section.
I already experimented with the SwingWorker before reading the tutorial and liked it except for the annoying return and interim results types as I’m migrating an ancient Java 1.1.8 GUI to JDK 6 at work and those Runnable classes I’m thinking of converting to don’t have any return types.